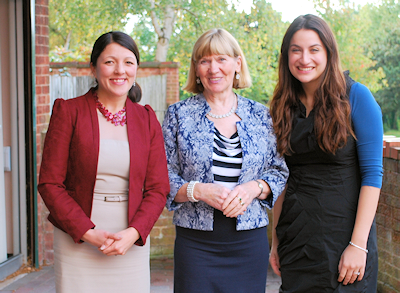 Labour will ensure mental illness is on par with physical illness

“People are regularly telling me that mental health services are getting worse.  This cannot continue. It’s costing lives, reducing quality of life and the money spent on the consequences must be shifted towards prevention.

Let’s face it, there has never been a golden age for mental health services.  Maybe that’s because if you have mental illness it’s a challenge to get through the day, let alone fight the system.

Services are being cut, in-patient beds have been reduced and tragically, suicide has increased significantly according to the latest ONS figures. I asked Luciana Berger MP, Shadow Minister for Public Health to come to Redditch to see how we are fighting for improved services and mental wellbeing while providing mental health support and tackling stigma. Luciana met with the Redditch Mental Health Support Group and listened to their concerns about the drop in having been cut and how much they valued coming to the weekly group set up by volunteer Mary Jones eighteen months ago.

Neil Ordish, member of Redditch Mental Health Action Group and lead on a new mentoring project funded by the CCG, discussed the importance of long term support being available for people having had mental illness and who have come to the end of their therapy.  Usually the individual would be left to essentially get on with it and if something goes wrong they then have to battle to get back into the system and face lengthy delays, often resulting in a deterioration in their health.  Yet regular, sustained, low level support can break the endless cycle that so many face.

Luciana explained that a Labour Government would bring together mental, social and physical care to improve services for people and bring collective responsibility for the health of patients.  And for the first time mental illness would be treated on par with physical illness.

I have seen the impact of unfair government policies over the last four years on the mental health of people in Redditch.  People stressed out or struggling with depression going into rent arrears for the first time thanks to this government’s bedroom tax.  Labour has pledged to cut this unfair tax which will ease the pressure put upon people who cannot downsize because there aren’t enough smaller properties for them.

Mental health can be improved and must be improved because mental ill health affects the whole of society directly and indirectly.  The time to act is now”.

If you are interested in learning more about the Redditch Mental Health Action Group email redditchmhag@gmail.com

The most profitable investment is the one you’re making to your own health. Do not miss your chance to get stronger, healthier, self-confident and tons of positive energy! Sign up to the Headgym to build yourself esteem!

HEALTH chiefs would be held more accountable for the closure of services at sites such as Orchard Place if mental health was combined with physical and social care.

That was the message from MP Luciana Berger, shadow minister for public health which incorporates mental health, as she spoke to some of the volunteers who help run services in Redditch on Thursday (October 16).

Members of the Mental Health Support Group, which runs weekly at The Space in Winyates, spoke to Mrs Berger about how cuts to services such as the drop-in at Orchard Place near the town centre had left them isolated and worsened their conditions.

But she also heard how the support group and a mentoring project currently being piloted in Redditch had provided alternatives for people unable to access NHS support.

Ms Berger told the Standard Orchard Place was a ‘really good example’ of how bringing the budgets of mental and physical health and social care together would benefit patients as it would mean everyone was ‘collectively responsible’ for the consequences of making cuts.

“What should be the most important thing is timely support to people when they need it. If we have a Labour Government come 2015 we can fix the situation. It is not beyond repair.

“But I have no idea what we are looking at in 2010, I am really worried for mental health if we do not have a Labour Government next year. Another five years of this and what is going to be left? The Government is giving up on and abandoned people who need the most help.”

She added more needed to be done to ensure the parity of esteem between mental and physical health, which is now written into law, became a reality.

Rebecca Blake, Labour Parliamentary spokeswoman for Redditch and vice-chair of the Mental Health Action Group, said: “People don’t live their lives in the isolated ways our statutory services operate in. When individuals are having a really hard time having to negotiate services even professionals struggle with, it is clear to see the system needs simplifying.

“I know first-hand the stress caused to people by being passed from pillar to post. When you consider the implications this is having on the patient, their loved ones and the waste of money, the lack of support must not be allowed to continue.”