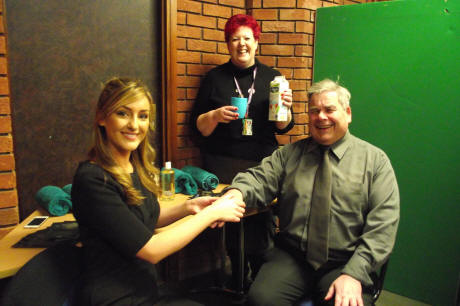 HAND massages, healthy food and advice were on offer to council staff as part of an event to promote positive mental health.

The second annual Time To Talk day, organised locally by UNISON branch secretary Laney Walsh, was hosted at the Town Hall and visited by 222 people.

Organisations including Headgym, Yum Tum Club, the Health Trainers, the Cognitive Behaviour Therapy team and Redditch Borough Council’s own Phone A Friend team were on hand to give out advice.

Ms Walsh told the Standard as well as hosting the annual event in conjunction with national charity Time To Change, they were organising them every month on a smaller scale.

“It has been really positive and really well supported today. We are also relaunching Phone A Friend and calling for more staff volunteers.”

Council leader Bill Hartnett said: “Mental health can happen to anybody and up to one in four may be affected at least once in their lifetime. If we are all working together we can dispel the myths and make life better for everybody who lives and works in the borough.”

The most profitable investment is the one you’re making to your own health. Do not miss your chance to get stronger, healthier, self-confident and tons of positive energy! Sign up to the Headgym to build yourself esteem!